Joomla was first released, unsurprisingly as v1.0 in August 2005. Since then there have been a series of releases made. For most business users, the important releases are those that are granted Long Term Support (LTS). An LTS release places the software into a future freeze, meaning no additional functionality will be introduced. The only additional releases will be in the form of maintenance releases. At the conclusion of the support period, the product reaches end-of-life (EOL). 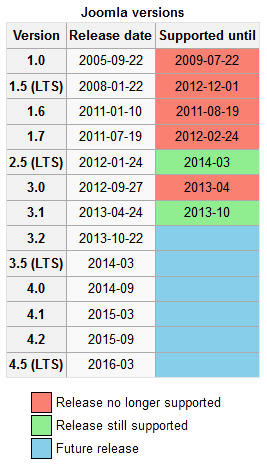 When one Joomla product reaces EOL, the following major version is granted LTS status. For example, when Joomla 2.5 reaches its end in March, 2014 the Joomla 3 product will have reached version 3.5 and will be granted long term support. This is the point where business users should update their Joomla software to ensure their system is safe and secure. At this point, no security nor maintenance releases will be made for the EOL product.